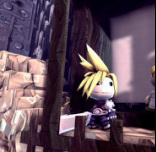 Cloud Strife is the main protagonist in the Compilation of Final Fantasy VII,An arrogant and proud swordsman at first, Cloud believes himself to be a member of an elite warrior unit called SOLDIER. However, he discovers the memories of who he was were not his own and, with the help of his friends, learns there is more to being a hero than possessing physical strength and fame.

Barret Wallace is a playable character in Final Fantasy VII. He is the leader of an eco-terrorist group called AVALANCHE, trying to prevent Shinra from using Mako, the planet of Gaia's life source, as a form of energy. However, his seemingly benevolent cause of fighting for the Planet is a cover for his true personal vendetta and anger, which he later must come to terms with. Despite his brash and sometimes violent attitude, Barret has a good heart, and is torn between fighting and caring for his adopted daughter Marlene.

Tifa is the only one of the cast who knew Cloud Strife when they were children and is his childhood friend. She is strongly opposed to the Shinra Electric Power Company, joining the resistance group AVALANCHE to fight them.
Though she has a strong will and possesses great physical strength, Tifa also has a motherly streak and is caring, though she is shy to express herself. She supports Cloud as his comrades and helps him fight his nemesis Sephiroth, bearing the same deep hatred for him as Cloud does due to the destruction of their hometown.

She is the last of the Cetra, an ancient race with powerful magical abilities, and so the Shinra Electric Power Company hunts her throughout her life seeking to exploit her powers.
Aeris is portrayed as an independent, outgoing and kind young woman who displays an intuitive understanding of others at times, and is deeply in-tune with nature. During Final Fantasy VII, Aeris is part of a love triangle along with Tifa who are in love with Cloud Strife. 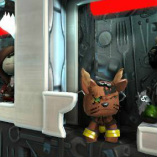 Red XIII, real name Nanaki, is a red lion or wolf-like beast that serves as one of the playable characters in Final Fantasy VII. Red XIII was the name he received as a specimen designation while held captive and experimented upon by Professor Hojo. Even though he is 48 in human years, his age is comparable to around 15 to 16 years old by his own species' standards. He fights alongside Cloud and his allies to fulfill his duty to the Planet to defend it as a warrior.

Yuffie Kisaragi is a secret playable character in Final Fantasy VII. She is a Ninja and a Thief, wielding a large shuriken. As a rebellious and cocky tomboy, Yuffie desires to restore her homeland Wutai to the glorious nation it was before being conquered by Shinra Electric Power Company. Despite her sometimes obnoxious personality, Yuffie is friendly, helpful, and willingly helps the party in their battles, as well as being very optimistic toward many situations.

Cait Sith is a playable character in Final Fantasy VII. He is a cat riding a giant stuffed toy moogle, working as a fortune-teller in the Gold Saucer. He is really a robotic puppet controlled from far away by Reeve Tuesti, Shinra Electric Power Company's head of Urban Development. Even though Reeve works with the antagonist corporation Shinra, he develops a keen interest in saving the Planet, making Cait Sith useful to the party, as he knows all about the Shinra's plans. Despite his playful and carefree persona in the form of Cait Sith, Reeve is actually a somber and serious man, though he does harbor a good heart with a natural worry for others.

A former Turk with a mysterious past, Vincent's hidden secrets tie him directly to several of the Compilation of Final Fantasy VII's main antagonists.
Vincent's weapons of choice are handguns and his Limit Breaks cause him to shapeshift as a result of the experiments Professor Hojo performed on him.Dark and brooding over his past "sins," Vincent carries many burdens and secrets. Despite his cold personality, he is not uncaring.

Cid Highwind is a playable character in Final Fantasy VII who also appears in other titles of the Compilation of Final Fantasy VII. He is part of a long tradition of Final Fantasy characters named Cid. He is the most uncouth of the protagonists; he constantly swears and loses his temper, and chain-smokes cigarettes. Despite this, he has a good heart, and is even voted temporary leader of the party at one point.
He is a tough talking, warm-hearted old pilot who hasn't forgotten his dreams...

Sephiroth is the main antagonist of Final Fantasy VII, and one of the major villains of its extended universe. A member of SOLDIER, Sephiroth was idolized for his supreme strength and considered a war hero. After misinterpreting his origins, and believing himself to be the only remaining survivor of the Ancients, or "Cetra," Sephiroth enacts a vendetta against mankind, with the ultimate goal of becoming a god and controlling the Planet. Many of the events in Final Fantasy VII are underlined by Cloud Strife and his friends trying to locate Sephiroth in order to make sense of unresolved questions laid forth early in the game.He also develops something of a messiah complex, proclaiming several times he is "the chosen one," destined to lead the Planet and become a god.